It is time to gird for full Modern Monetary Theory. With the democratic sweep in place, we are about to experience even more of the double-barreled fiscal and monetary stimulus that we saw in 2020. Overwhelmingly today, such policies have served to incite animal spirits toward financial assets. Investors are already positioned, all in, on both stocks and bonds in the US creating a highly imbalanced market. The problem is that money printing married with fiscal spending is crashing head-on with an emerging commodity supply problem that will likely stir up rising inflation which is bearish for both equities and fixed income. Get ready for a volatile 2021, the year of reckoning for twin asset bubbles as the world attempts to emerge from the Covid-19 pandemic.

The macro setup is in place for a self-reinforcing unwinding for stocks and rise in commodities akin to 1920-21, 1973-74 and 2000-02. On the long side of this trade, there are merely two sectors in the US stock market – energy and materials – that offer substantial value and upside potential today as part of this macro reconciliation. We believe the smart money is already rotating out of historically overvalued equities and fixed income securities and into undervalued commodities. Soon it should become a stampede, a reflexive great rotation.

The Fed is determined to increase the rate of inflation to ease the record debt burden dragging down economic growth. The fiscal powers will be playing along, so inflation is indeed what we are likely to get. Long term economic history proves that the forces of rising wholesale and consumer prices cannot easily be brought back under control by central banks once they get loose.

But what about the “output gap” in recent years, the theoretical paradox holding inflation in check due to an underachieving economy? And what about the deflationary forces of technological innovation and aging demographics? At this stage of the macro cycle, in our analysis, inflation is all about the “input gap”, i.e., supply shortages of primary resources. While the “new economy” has been enjoying the limelight in recent years, the stage for “cost-push inflation” has been set due to underinvestment in the “old economy” now that policy makers are about to pull out their biggest bazookas yet to boost aggregate demand.

Global central banks added a total of $9.1 trillion of assets to their balance sheets in 2020. To compare, this year’s monetary stimulus was about three times their response to the Global Financial Crisis in 2008. We also saw at least $25 trillion of newly issued debt worldwide while the aggregate value of all negative yielding bonds reached close to $18 trillion in 2020. With this macro backdrop, it is staggering to see a monetary metal like silver still trading sub $30/oz. 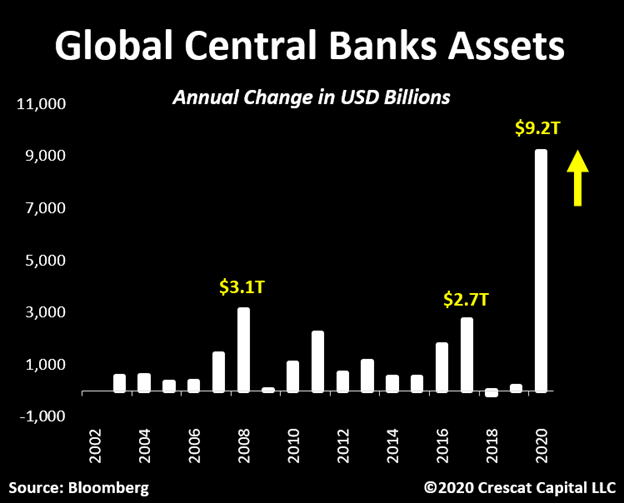 With gold and silver closing the past year up 25% and 48% respectively, miners are in paradise. They have never reported this much positive free cash flow in a quarter. Over 60% of the newly generated capital was used to pay down debt, which was the largest quarterly amount in the history of this industry. Meanwhile, overwhelming skepticism remains among investors. It is time for market participants to do some homework and get past their last cycle views about precious metals mining or they could miss this historic opportunity. The recent fundamental progress across the industry is indicative that miners are indeed in a new bull market.

The relative valuation attractiveness for the top 50 gold and silver mining stocks compared to the top 50 tech stocks has never been greater. This is the first time in the last 30 years that miners trade at a higher free cash flow yield than tech companies. 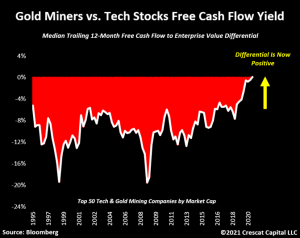 Since March 2020, the outperformance of silver and the mining stocks relative to gold only adds to how early we believe we are in the cycle for precious metals. Looking back in history, gold tends to lead during the bottoming and early bull market phase of the cycle. Gold outperformed silver and mining equites from its 2015 lows up until March 2020 at which time the other two groups completed a full retest of their 2015 lows. Since March, silver and stocks have led as gold has also moved higher. A look at the gold to silver ratio in the chart below shows that it has drastically moved lower since March and is ripe for an even more meaningful multi-year breakdown. This is an important piece of the macro puzzle. After the initial phase of gold’s relative strength, silver and the mining stocks tend to outperform for the duration of the precious metals bull market. 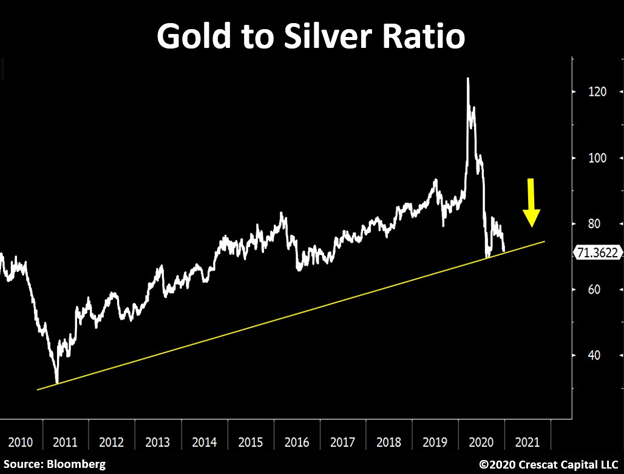 Remarkably, smaller silver miners have begun to disconnect from junior and senior gold miners, just like the metal prices. It is a sign that allocators have begun to move up on the risk curve and deploy capital towards a significantly more volatile part of the industry. We view this move as being incredibly bullish for our long precious metals thesis and believe the entire space is now on the cusp of a big move to the upside. 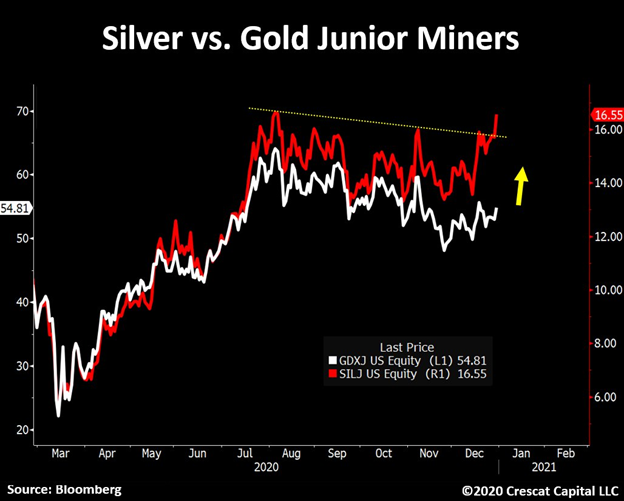 Looking at the 10, 20 or even 30-year average performances all point to January as being the strongest month of the year. That is especially the case since 2014 where gold went up an average of 4.85% in January. It is by far the most bullish time of the year. From a timing perspective this seems ideal with how gold looks ready for a major breakout from a 4-month consolidation period. To note, the monthly seasonality of silver and miners is also similar. This is setting up perfectly for January to be another strong month for our precious metals’ positions.

While we have shown in past letters that future gold supply is historically constrained due to underinvestment, the lack of investment in silver mining looks even worse. One way to see this is by looking at the capital spending cycle for miners that more prominently focus on silver production. If we look at the SIL ETF members as a proxy, their aggregate CAPEX just reached a decade low. 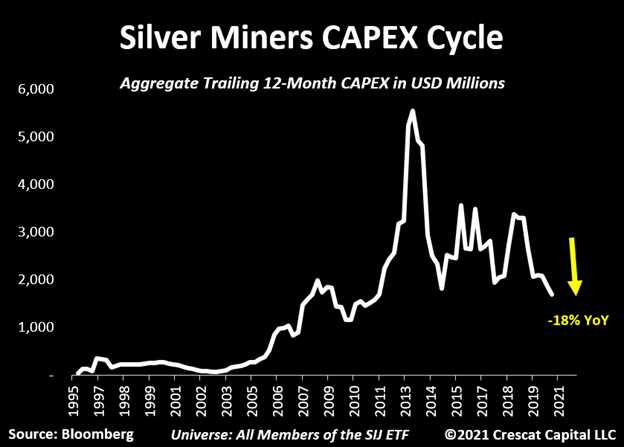 It is hard to believe that the senior gold stocks underperformed gold in 2020. To be loud and clear, with precious metals at these prices, miners are a steal. Investor’s widespread skepticism is about to face real fundamental growth like they have never seen before. This underperformance is an indication of how early we are still in the gold cycle. 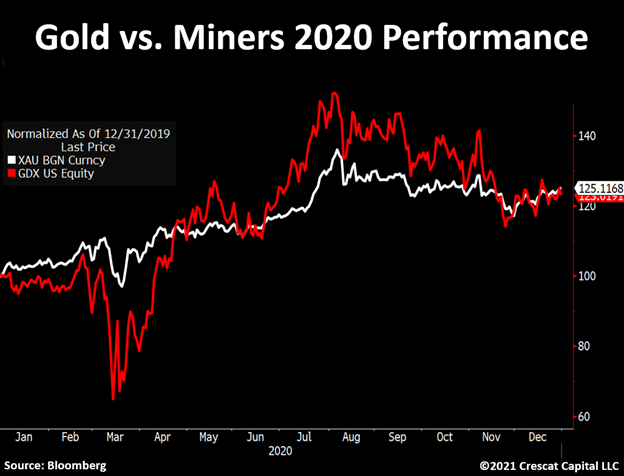 Inflation continues to gain force. As we elaborated extensively in our prior letter, rising consumer prices are likely the end game for speculative asset bubbles in the financial markets. In the last several weeks we noticed an important move in that direction. Commodities just broke out from a 12-year resistance line. We have not seen this asset class sustainably appreciate in a long time. It is now occurring while the Fed seems forced to continue running the economy hot. Monetary policy has become a funding mechanism for government spending. Massive central bank purchases of Treasuries also serve to suppress interest rates while enabling the US government to run a large fiscal deficit. We believe the combination of unprecedented levels of government stimulus with investors beginning to flock to scarce commodities and driving these asset prices up, it will set an inflection point for inflationary forces. 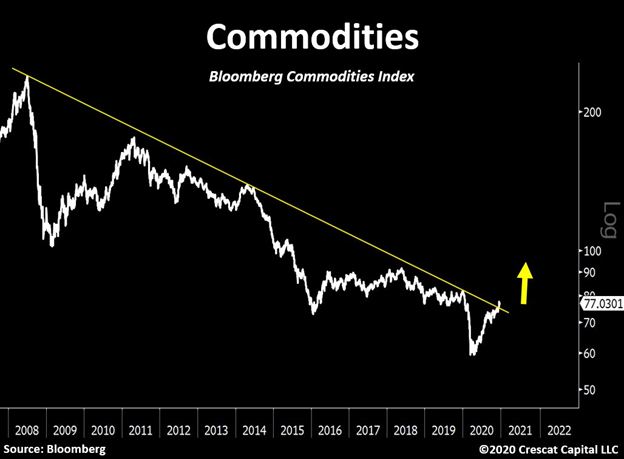