In this article, we will take a brief look at the Yukon, the prolific Tintina Gold Belt and drill down to the White Gold district, which makes up part of the belt, and what could be Golden Sky Minerals Corp. strategic position in the White Gold District.

Why the Yukon: Canada’s Yukon Territory is a mining-friendly jurisdiction with a long proud history in mining and exploration, starting with the 1897 Klondike Gold Rush. Mining is an important part of its economy today, as the Yukon experiences a new modern-day gold rush. For much of this time, smaller companies, placer miners “working the creeks”, dredging barges “working the rivers”, prospectors and mining entrepreneurs have walked, staked the ground throughout the Yukon.

However, this is changing because the majors are discovering what the juniors have long known: This region is largely underexplored, has exceptional geology, and has strong potential for district size mining operations that can replace the declining reserve profiles, which the majors are experiencing.

Mining companies continue to invest in the Yukon, not only because of the strong mineral potential, but also the clarity provided at all levels of government, programs, and partnerships with First Nations.

The Tintina Gold Belt, which extends from British Columbia to Alaska, is underexplored in its central section spanning the Yukon Territory including where it crosses the un-glaciated Dawson Range. The Tintina Gold Belt is a 1200km long and 200 km wide arc, extending from the south corner of Alaska into the northern part of British Columbia. Production mines and significant exploration and mine development projects demonstrate the geologic potential in the Dawson Range. Over 50 million oz of Gold have been discovered in this belt over the last 20 years. (See maps below) 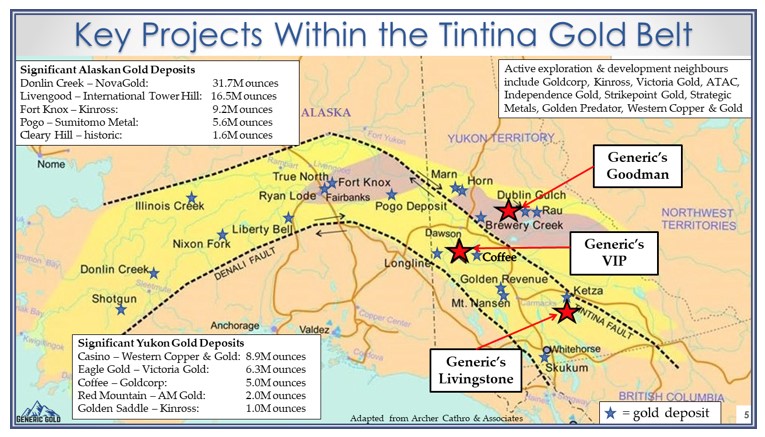 Golden Sky has 3 core assets in the Yukon:

Golden Sky Minerals Corp. shares are just now trading on the TSX Venture Exchange under the symbol “AUEN”. Golden Sky Minerals is a mineral exploration company focused today on gold in the Yukon Territory. The company is currently advancing its 3 main assets of the 6 property they hold, the Lucky Strike Property, located in the heart of the prolific White Gold District, the Bulls Eye Property which is ~50 km south of the Newmont’s Coffee Deposit, and the Hot Spot Property, which is located 25 km south of the Tanacross Copper, Gold , molybdenum porphyry deposit with a current resource of 360,000 oz’s of Gold. The Properties are all 100% owned with no underlying royalties or property payments. In addition, Golden Sky is actively looking for gold projects in good jurisdictions, to work active exploration programs continuously throughout the year.

The Company is led by John Newell, who is the President, CEO and Director. Mr. Newell has 38 years’ experience in the investment industry acting as an officer, director, portfolio manager and investment advisor in some of the largest investment firms in Canada including Scotia McLeod, CIBC Wood Gundy and Richardson Greenshields (RBC Dominion Securities).

John has raised over $500 Million in capital for exploration teams and producers. He is a Portfolio Manager at Fieldhouse Capital Management, specializing in precious metals equities. His broad network of retail and institutional investors has ensured that the Company is able to raise funds on a timely basis to advance its projects.

Rein Turna serves as Geologist and Director, with over 40 years of experience in mineral exploration in Canada. He is a registered professional geologist with the Association of Professional Engineers and Geoscientists of British Columbia since 1993.

Mr. Turna has held staff and consulting roles with major and medium companies including Placer Dome, Falconbridge Ltd. and Lac Minerals. He has extensive experience in property assessment as well as supervision of drill projects.

The sources of that gold remained uncovered until the discovery of the Golden Saddle (Underworld, Kinross, now White Gold) and Coffee deposits (formally Kaminak, now Newmont/Goldcorp) in the district. Many geologists and experts believe there are many more sources. While exploration for hard rock deposits has been limited in the past. This started to change in the past 10 years, when over 7 million ounces has been discovered in this area. Over time new technology, innovation, and more experience has continually enhanced companies’ abilities to discover new deposits, as well as expand on existing ones, which is encouraging senior miners to take a closer look and invest in the district.

In addition, the Yukon territorial governments, along with the Canadian federal government have committed 360 million dollars to build improved roads and infrastructure throughout the Yukon, including the White Gold District. This heavy infrastructure spending should drive down CAPEX costs and improve project economics for companies in the area. Investors can see from the insert below, how the landscape is changing in the area, as major gold producers are moving heavily into the area. To re-cap the reasons are excellent geology, vast areas of under-explored prime Terrane, geopolitical stability, infrastructure is decent and improving, a mining friendly culture, and new large deposits being found, examples being Goldcorp’s Coffee project, Victoria Gold’s Dublin Gulch, and ATAC’s Carlin style target. The rush back to North America will likely intensify as events continue to become more volatile worldwide, large mining corporations must look forward at least 10-15 years to be sustainable. 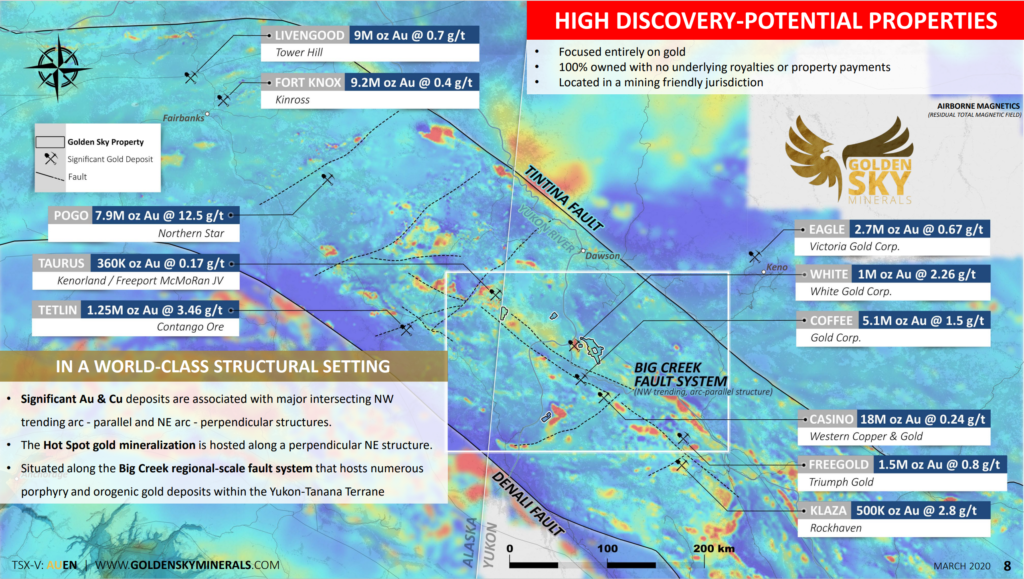 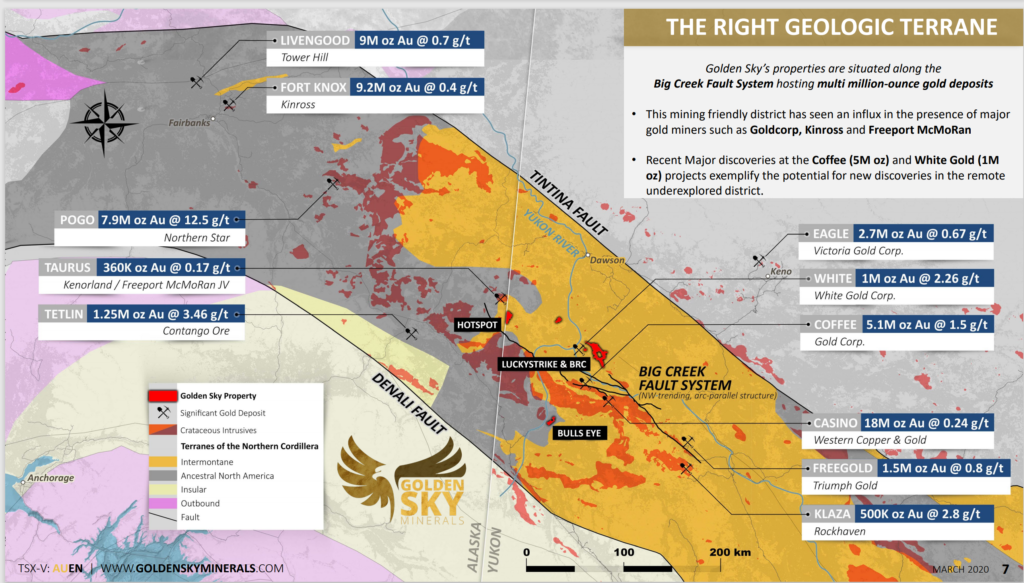 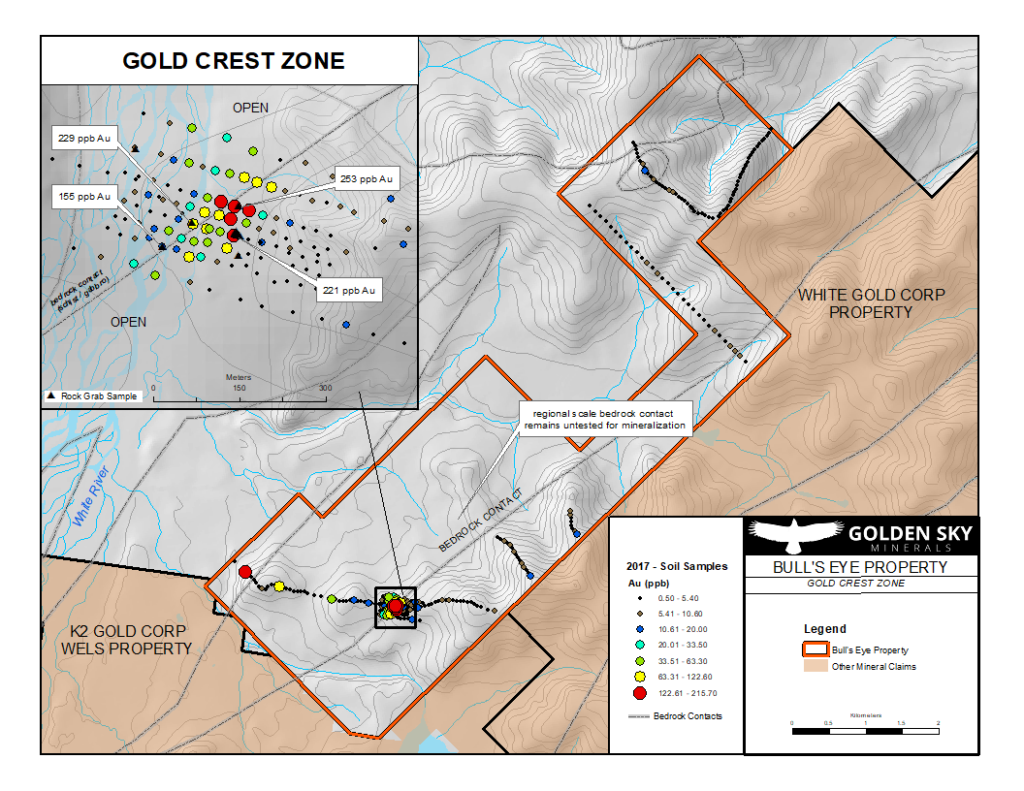 Bulls Eye Property was the first to see work this year in Golden Sky’s portfolio. It is contiguous to K2 Gold’s Wels Project 50km south of the Coffee Gold deposit. Drilling conducted by K2 in 2015 and 2017 yielded notable drill intercepts of 0.76 g/t over 97.5m and 2.37 g/t over 28.5m, respectively.

During field work in 2017, Golden Sky identified the Gold Crest Zone, a 200m by 250m gold-in-soil anomaly that remains open.

The Phase 1 program now completed (see July 20th 2020 news release) involved the collection of 560 soil samples, 50 prospecting grab samples, and the completion of a 134-meter-long trench. The majority of exploration, including the trench, was focused on the Gold Crest zone: an open-ended 200x250m geochemical anomaly with soil samples from a previous program assaying up to 0.22 g/t Au and prospecting grab samples assaying up to 0.25 g/t Au (see Figure 1).

Reconnaissance soil sampling and prospecting was also completed on unexplored areas of the property.

Due to favorable visual results, 30 additional claims were staked to bring the property to a total of 142 claims (2968 ha). Assays are pending 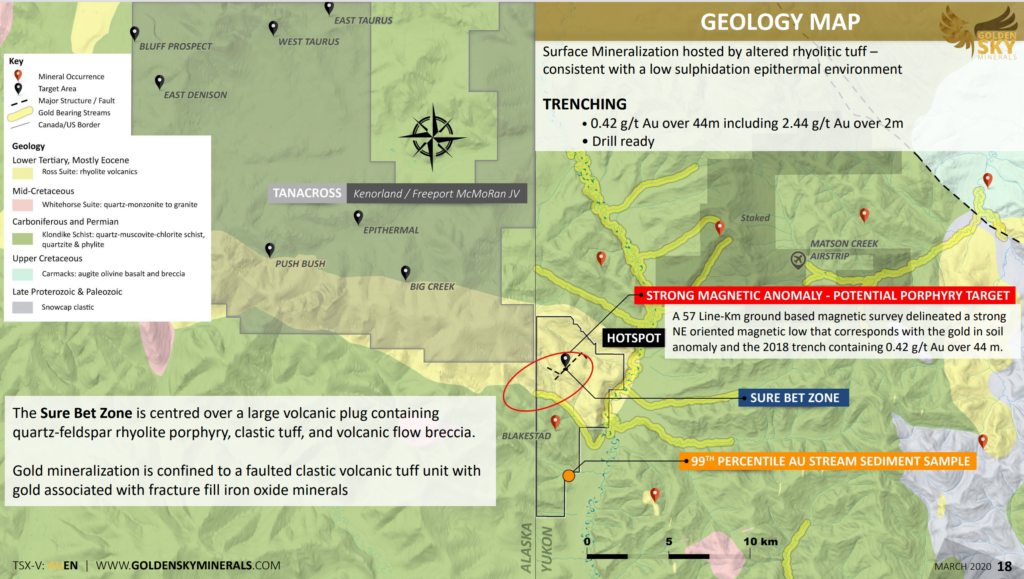 This is a newly discovered gold occurrence located in a largely under-explored part of the Yukon. It is located 25km south of the Tanacross Copper, Molybdenum and Gold Porphyry deposit (360,000 oz Au) in Eastern Alaska, right against the Yukon Border. Tanacross is being explored by a joint venture between Kenorland Minerals and Freeport McMoran.

Situated along the Big Creek Fault, Hot Spot hosts a 1.7-kilometer-long mineralized structure with gold-in-soil values up to 4.1 g/t Au and a pathfinder signature indicative of a low-sulphidation epithermal system. A short trenching program in 2018 returned values of 0.42 g/t Au over 44m (see September 10, 2018 news release).

Golden Sky Minerals has announced the mobilization of an exploration team to its Hotspot property located on the Yukon-Alaska border. This Phase 1 program will involve soil sampling to expand the Sure Bet zone, and preparation for a Phase 2 inaugural drill program to be conducted September 2020. (July 20th 2020 News release)

The company will also conduct an exploratory drill program at Hot Spot to test shallow low-sulphidation gold mineralization. A follow-up drill program will be executed to test the extent of this mineralization, as well as for, potential buried porphyry systems. 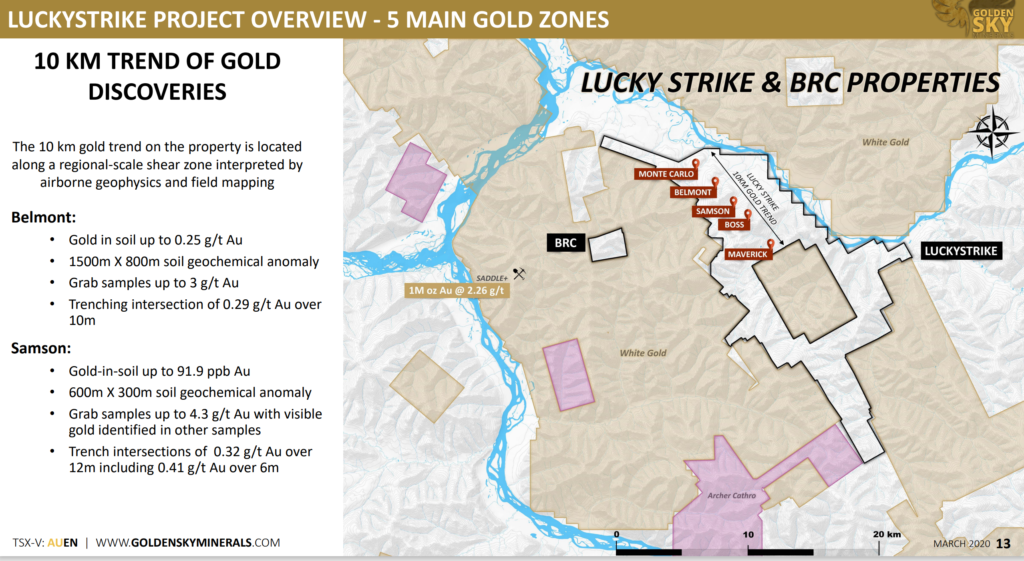 Future drilling on the property will focus on the Monte Carlo Zone, which is the only drill-tested zone to date. Strong potential for new discoveries remains on the other zones.

Soil sampling and trenching has been a prime tool in locating mineralized areas in the unglaciated White Gold District, and results from trenches in the Monte Carlo Zone at Lucky Strike are like those seen in the initial discovery trenches at both Coffee Creek and the Golden Saddle that led to the drilling of those deposits.

Golden Sky’s property covers more than 150 square km in total and is contiguous with White Gold’s Golden Saddle property in a mining district that has seen over 7,000,000 oz of gold discovered since 2007. This area has excellent access by road with Goldcorp’s haul road crossing the property in three locations, as well as two barge landings for river access, a permitted airstrip on the property and a larger well-maintained airstrip in the area.

The Luckystrike property held in the Golden Sky portfolio has 5 main gold zones encompassed within a 10KM long gold corridor (more detailed information can be found on SEDAR); Monte Carlo, Belmont, Samson, Boss and Maverick. The anomaly in the Monte Carlo Zone measures 1450 meters by 450 meters and the Belmont Zone anomaly measures 1500 by 800 meters, and both zones remain open. Either zone is large enough in scale to host a deposit the likes of either the Golden Saddle deposit or Goldcorp’s Supremo Zone. The other three anomalies are the Samson zone, measuring 600 by 300 m, the Boss zone, measuring 1,000 by 1,000 m and the Maverick zone, measuring 150 x 200 m, all of which remain open. See map below.

The 10 km gold corridor is being further delineated by soil sampling geophysics, prospecting, bedrock trenching and drilling in 2018 further expanding on (2017 results shown below).

The picture below shows the drill hole that management considers the discovery hole at Monte Carlo Zone grading 22 meters of 5.36 grams per tonne gold.

Pictures of the core from drill hole DDSL-17-09

The anomaly at Monte Carlo is 1450m X 450m and remains open. This area is large enough in scale to host a deposit the likes of either The Golden Saddle deposit or Goldcorp’s Supremo Zone. To date, all 8 trenches along the 450m strike length at Monte Carlo have encountered near surface gold mineralization in bedrock and many drill targets remain to be tested. Monte Carlo has a northwest trending geophysical signature indicating a mineralized contact or structure that has been mapped using IP, ground magnetics and airborne geophysics. This is coincident with gold mineralization seen in the 2016 and 2017 trenches. This anomaly is observed at depth and along strike for 700m and remains open. 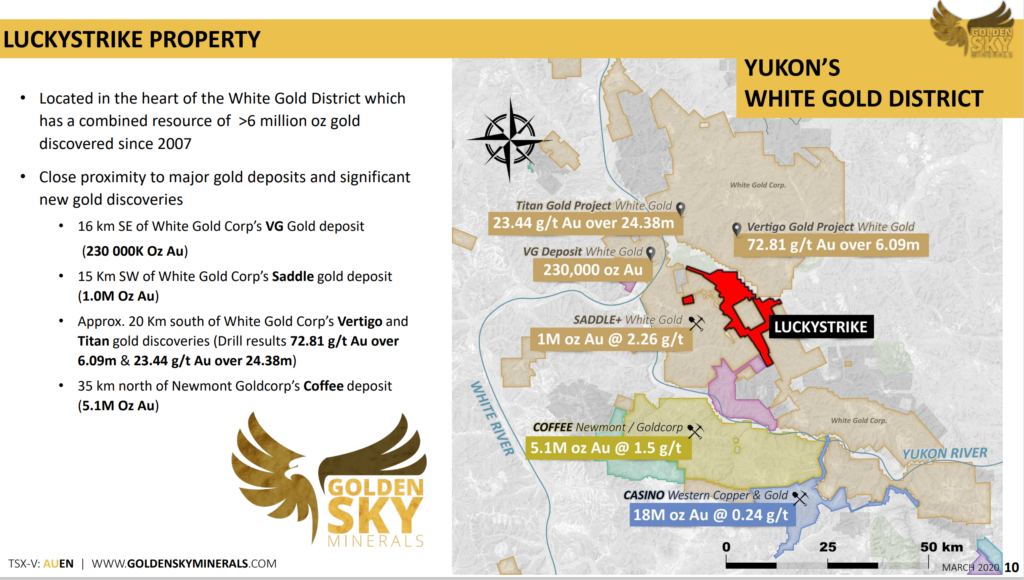 The picture below shows the drill hole that management considers the discovery hole at Monte Carlo Zone grading 22 meters of 5.36 grams per tonne gold. 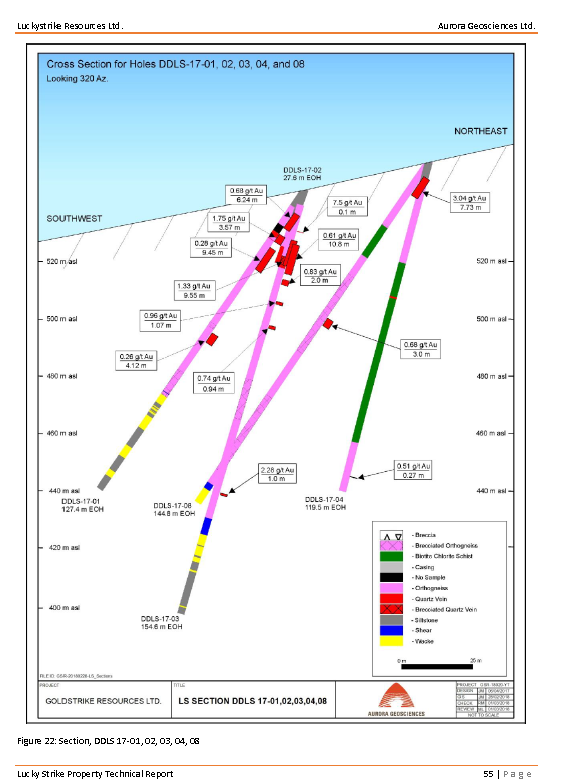 Pictures of the core from drill hole DDSL-17-09 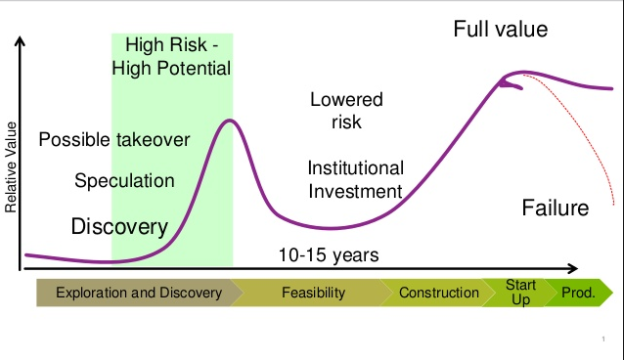 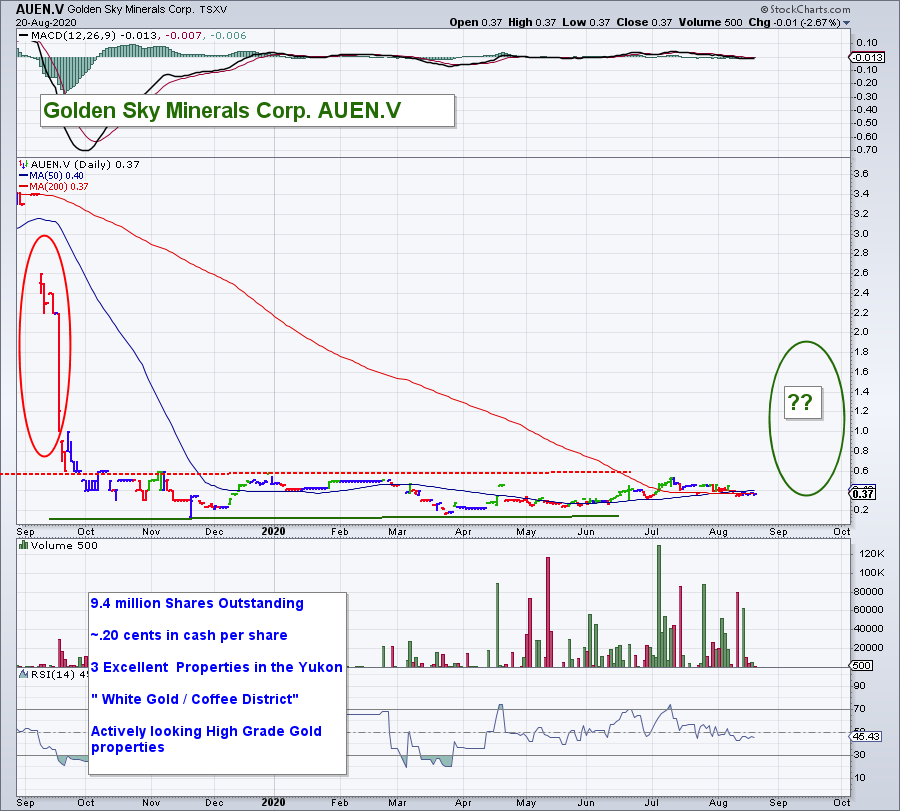 Technically the shares have a long base, and appear to be under accumulation and could fill the gap left from the steep decline in September of 2019

In Summary, Golden Sky Minerals appears to be an exciting, high probability ground floor opportunity in the high risk, high reward, early discovery phase of the mining cycle (see chart above). Located in a highly prospective region that is inhabited by majors and boasts of several multi-million-ounce gold deposits. Its upcoming exploration program, as well as the potential acquisition of new properties present the company with near term price catalysts.

The Company closed trading at the TSX Venture Exchange on Friday 14th August at C$ 0.375, valuing it at ~C$3.8 Million. With producers, royalty and streaming companies as well as advanced-stage explorers all having had quite a run up in the past few months, investors will naturally move down the food chain towards prospective junior exploration companies as the bull market progresses.

In that kind of environment, Golden Sky is the sort of speculative play that can return multiples of one’s investment.

Cautionary Note: The shares could be thinly traded and subject to large swings in this market, so liquidity may be an issue, given the low share count, currently 9.4 million.

There's no inflation if u don't eat https://t.co/iE8M5RI1Sz
View on Twitter